MATZEVAH: UNVEILING OF THE HEADSTONE

A headstone (tombstone) is known as a matzevah (“monument”). There are varying customs about when it should be placed at the head of the grave. Most communities have an unveiling ceremony a year after the death. Some communities have it earlier, even a week after the burial. In Israel it is custom to unveil the stone after the “sheloshim”, the first thirty days of mourning. There is no restriction about the timing, other than the unveiling cannot be held during certain periods such as Passover or Chol Ha’Moed.

At the end of the ceremony, a cloth or shroud covering that has been placed on the headstone is removed, customarily by close family members. Services include reading of several psalms (1, 24, 23, 103), Mourners Kaddish (if 10 men are available), and the prayer “El Moley Rachameem.” The service may include a brief eulogy for the deceased.

From Wikipedia, the free encyclopedia 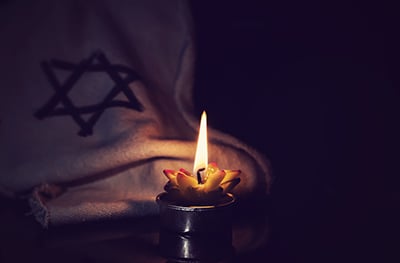 There are many Jewish burial traditions and customs. Click here to read more.

No upcoming burials at this time.